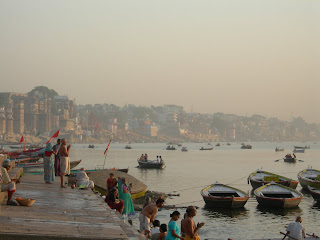 From the Buddha trail to Varanasi, the holiest city in India for the Hindus; a trip not for the faint of heart to say the least. I was extremely fortunate to have a Brahman priest as my government approved local guide who also happens to be the spiritual guru for Goldie Hawn, Heidi Klum and Seal. Dr. Shailesh Tripathi introduced me to Varanasi not as a city of beauty but to feel it with all five senses. With an open-mind, I explored this ancient living city as old as Babylon.
In Varanasi, life flows around the Ganga (Ganges) River physically and spiritually. The Hindus try to make a pilgrimage to this river at least once in their lifetime to purify their spirits either by bathing in the waters or sprinkling a few droplets of water on the head while chanting a prayer. The Brahman priest did this for me while a boatman rowed an old, wooden boat down the river. According to this ritual, the waters clear the karma of the past and present so one is prepared for death and rebirth into a better life. Although I'm not a Hindu, Indians are open-minded and say it can apply to anyone of any faith and even those who are agnostic. Hopefully, from now on my life will be better and I'm most grateful to have participated in this ancient practice of the Hindu religion.
As mentioned earlier, this city is primarily for Hindu pilgrims. I would suggest sticking to boat rides at sunrise and sunset to experience the Brahman priests, gurus, yogis welcoming the day with music and prayer beneath the high walls of the maharajas' old, riverside palaces, and also the notice the numerous ghats where the the faithful Hindus bathe and pray (see photo). And, every evening at sunset, watch the beautiful, Hindu ceremony Ganga Arati dedicated to the river and performed by priests with music, incense, chanting and fire.
Despite the magic and mystery behind these Hindu rituals, as a Westerner and a non-Hindu pilgrim, I would avoid walking through the narrow alleys in the heart of the city directly behind the ghats that are marked by smelly, cow dung everywhere as the cow is considered holy. If you do decide to venture dwon these filthy streets off the beaten path, then watch your step! Again, this is not an easy city to visit and I would recommend visiting the Golden Triangle (Delhi, Agra, Jaipur) first, but once you feel or think you're ready for your own spiritual pilgrimage, then Varanasi may become one of the most memorable places you've ever visited during your worldwide travels.
Posted by Laura Thompson at 1:58 PM 1 comment: