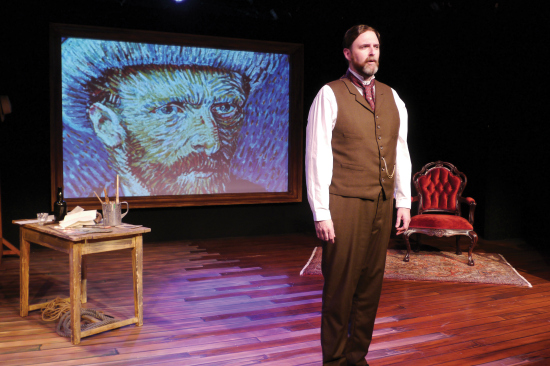 Leonard Nimoy's Vincent has made its Off-Brodway debut starring James Briggs as Vincent's brother Theo who tells the tragic story with brotherly love. It's a one-man show based on their correspondence through letters. The setting is August 5, 1890 in Paris, France.

Nimoy delves into parts of Vincent that perhaps the world was unaware of like Vincent being a lover of God who wanted to be a preacher like his parents but it didn't work out, then he became an artist, a lover of art. He devoted his life to art and produced over 70 paintings during the last 100 days of his life. One of his paintings finally sold for 400 French francs right before he died. The relationship between the brothers was very close and Theo died six months after Vincent.

It's a difficult story to portray by one actor but Briggs did a good job. The content in the letters told the stories of Vincent's journey through life spiritually, emotionally, physically, and psychologically. It's said he wasn't mad only suffered from Epilepsy, later determined a genius. The nice part of the set design was that it showcased Vincent's most famous paintings that brought the whole story into perspective.

If you love Vincent Van Gogh's paintings, then I'd recommend to see this play and learn about his life from his brother's Theo's perspective through their letters and their strong bond.


http://www.loralia.com   @LORALIA
Posted by Laura Thompson at 5:48 PM No comments: