This is Part 1 of a three series blog about my recent trip to India that commences in Sarnath about 6 miles north of central Varanasi. After leaving Varanasi known as the holiest city for Hindus which I'll recount in another story, my spiritual journey led me to Sarnath. Sarnath is where the Lord Buddha gave his first sermon to his disciples and King Ashoka 300 B.C. built a Dhammekha Stupa in Deer Park honoring this sermon.

As fate would have it, here I am standing with Burmese monks in front of the stupa (please see photo below) that will make my Burmese friends in New York happy, one who also became a lay monk but leads a civilian life with his lovely family.
While Varanasi jolted my six senses and turned my world upside down in a good way, Sarnath calmed my spirit like a cool, ocean breeze kissing my face despite my being in the middle of a dry, dusty desert like atmosphere; even though Deer Park is spotted with trees and preserved like a World Heritage site. 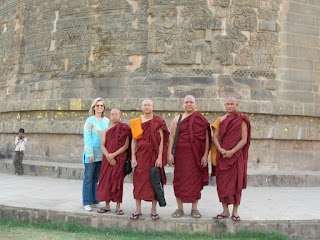 My take away from Buddhism is about walking the middle path, acting with loving kindness and enacting tolerance. In short, let's be respectful of religious diversity as all faiths lead to the same destination.
Posted by Laura Thompson at 10:59 AM 1 comment: