Valerie Capers at The Pen and Brush 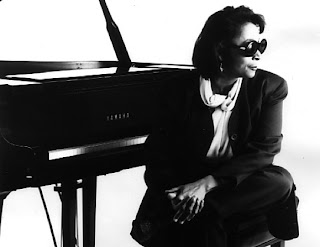 On June 28th, in celebration of Black Music month, The Pen and Brush bestowed Dr. Valerie Capers with a Life Achievement Award in recognition of her outstanding career as a composer, pianist and educator. Before the official ceremony, there was a live jazz performance given by Dr. Valerie Capers playing the piano, along with her ensemble featuring John Robinson on bass and Rudy Lawless on drums.

Friends of the trio, The Pen and Brush and jazz enthusiasts moved their bodies in rhythm to the beats and sounds and applauded with enthusiasm at the end of each song. The ensemble was a joy to listen to and it was suggested that The Pen and Brush host more “Jazz on Sundays.” For more information about The Pen and Brush, please visit: http://www.penandbrush.org/

After the performance, Dr. Capers was given her award by Rashidah Ismaili, a Pen and Brush board member. Dr. Capers graciously accepted this honor and happily chatted with her fans afterwards.

Dr. Valerie Capers was born in the Bronx and received her early schooling at the New York Institute for the Education of the Blind. She went on to obtain both her bachelor's and master's degrees from The Juilliard School of Music. She served on the faculty of the Manhattan School of Music, and from 1987 to 1995 was chair of the Department of Music and Art at Bronx Community College of the City University of New York (CUNY), where she is now professor emeritus.

Dr. Capers has been awarded many honorary doctorates from various prestigious universities and colleges for her impressive work as an innovative educator. She has also received many awards and commissions, including the National Endowment for the Arts, a special-projects grant to present a jazz series at the Bronx Museum of the Arts, Meet the Composer, the CUNY Research Foundation, the Smithsonian and The Fund for Artists of Arts International.

Throughout her performing career, she has appeared on numerous radio and television shows and has also performed with a roster of renowned artists, such as, Dizzy Gillespie, Wynton Marsalis, Ray Brown, Mongo Santamaria, Tito Puente, Slide Hampton, Max Roach, James Moody and Paquito D'Rivera.

As a composer, three of Dr. Capers' most noted compositions are Sing About Love, the critically acclaimed Christmas cantata produced by George Wein at Carnegie Hall; Sojourner, an operatorio based on the life of Sojourner Truth, performed and staged by the Opera Ebony Company of New York; and Song of the Seasons, a song cycle for voice, piano and cello (which has been recorded several times) was both commissioned by the Smithsonian Institute and premiered in Washington, D.C., at the invitation of the Smithsonian, and recently performed at Weill Recital Hall in New York City.

Dr. Capers was the first recipient of Essence magazine's "Women of Essence Award for Music," where she was in the elite company of fellow honorees Oprah Winfrey and Marla Gibbs.

If you ever get a chance to see Valerie Caper and her ensemble perform, I’d highly recommend it; especially, if you love jazz.
Posted by Laura Thompson at 2:59 PM No comments:

On June 12, 2009, Katya Grineva, Moscow-born pianist, graced the stage at Carnegie Hall for the 11th year and played a selection of romantic, solo piano pieces in honor of Adi Da Samraj who was a renowned writer, artist and spiritual teacher.

Her diversified program of music focused on some of her favorite romantic composers, including Chopin, Liszt and Schumann as well as Satie’s First Gymnopedie, Debussy’s Clair de Lune and Ravel’s Bolero. Her mastery of the piano and the subtlety and beauty of tone truly transported the audience to a state of bliss. The New York Times described her as “liquid…dreamlike.” One could feel that her music came from deep within her heart inspired by love. It was a magical evening with three encores and Katya was showered with bouquets of red roses at the end of her performance.

Not only does Katya play at concert halls and for presidents and dignitaries, but also for the impoverished and children around the world. She’s dedicated especially to exposing children to the beauty and benefits of classical music. As a result, there were many children of all ages at this concert and from looking at their facial expressions; they seemed to be enraptured by her music. It was delightful to see so many children present.

In summary of her achievements, Katya, a Steinway Artist, has been a soloist with the Acadiana Symphony, the ARS Nova Musicians Chamber Orchestra, the Manhattan Virtuosi Orchestra, the European Philharmonic Orchestra in France, the Guayaquil Symphonic Orchestra in Ecuador, and as a guest artist at Avery Fisher Hall. Her recitals have also captivated audiences at the Laurier Society in Paris and at the Salle Gaveau, one of Paris’s most prestigious concert halls. In addition to sharing her musical gift worldwide, she has been honored with many awards for her philanthropic efforts, most recently, with the Gusi Peace Prize awarded by Gloria Macapagal Arroyo, the President of the Philippines.

For further information about Katya Grineva, please visit her Web site: http://www.katyagrineva.com
Posted by Laura Thompson at 11:52 AM No comments: