Julian Sands in A Celebration of Harold Pinter 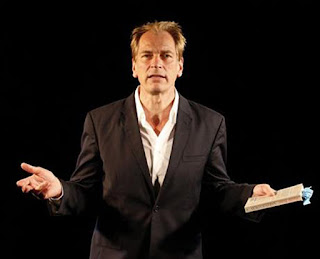 Julian Sands performed brilliantly in A Celebration of Harold Pinter directed by John Malkovich. The idea to explore the structure and content of Harold Pinter's prose, poetry, and political activism started with a luncheon given by Harold's wife, Antonia Fraser, that developed into a wonderful collaboration to create this solo show. Sands brings a personal touch to the stories and poems by Pinter because he knew the man and his entourage. Greetings were even conveyed to the audience from Antonia in London to the New York audience on Easter Sunday.

Harold Pinter (October 10, 1930 - December 24, 2008) was a Nobel Prize-winning author with a career spanning more than 50 years. He's a renowned playwright, The Birthday Party and the Tony Award-winning The Homecoming, a screenwriter, actor, director, poet, and political activist. Sands re-enacts Pinter's description of himself, "I'm well aware that I have been described in some quarters as being 'enigmatic, taciturn, terse, prickly, explosive and forbidding' and that set the tone for many of the stories and poems to follow, along with wry humor.

There were touching remarks about Pinter's admiration for Samuel Beckett (Irish avant-garde novelist, playwright , theatre director, and poet--died December 22, 1989) who brought forth beautiful works like Waiting for Godot and Endgame.

What surprised me the most, were Pinter's poems about the dying process, looking death in the mirror, and exploring rituals associated with death. It was real and poignant. On the lighter side, there were many poems about his school days, cricket, Ireland, and current affairs.

It's a delightful journey that Sands brings you on and at the end you can get your own dedicated copy of Various Voices by Harold Pinter signed by Julian Sands on behalf of Pinter. It's a nice way to end the performance and keeps the voice of Pinter alive.

I'd highly recommend to go and watch the production of Julian Sands in A Celebration of Harold Pinter directed by John Malkovitch and presented by The Irish Repertory Theatre at the DR2 Theatre in Union Square.


http://www.loralia.com   @LORALIA
Posted by Laura Thompson at 2:50 PM No comments:

Email ThisBlogThis!Share to TwitterShare to FacebookShare to Pinterest
Labels: Off Broadway Theatre Review 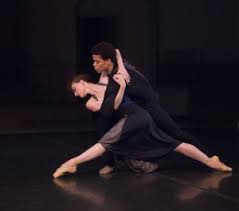 The New York Theatre Ballet (NYTB) presented four ballets by acclaimed choreographers staged by emerging choreographers. The programming represented revivals of masterworks (Philip Glass and Richard Altson), a new work, Chemical Bond, by Melissa Payne Bradley that originally premiered in San Francisco, and of course, Kyra Nichols who staged NYBT 2016 premiere of Antiques Epigraphs (Jerome Robbins). NYBT's repertory programming maintains fidelity to the original movements, gestures, costumes and props, according to historical documents when it's based on a revival. As for new programming, it's a combination of dynamic movement, storytelling, and wit.

The four ballets were performed to live music. The musicians were superb (Piano: Michael Scales, Zheng Ma. Cello: Amy Kang. Flute: Mira Magrill). The last piece Song Before Spring with music originally composed by Philip Glass and arranged by Josh Quillen, NYU Steel Drum Director, turned out to be mesmerizing and surreal. I liked all the ballets but this one impressed me the most.
I think it's a pity it had such a short run but I would highly recommend to go to NYBT's other performances throughout the year. They also perform one hour storybook ballets for families which is tailored to the short attention span of children.


http://www.loralia.com   @LORALIA
Posted by Laura Thompson at 3:34 PM No comments: