What if corporations and non-profits could join hands to create change and enhance distinct environments around the world? Executive Coaches Lena Beck Roervig and Laura Thompson have launched a program that will do just that - Coaching for Global Change. Find out how everybody benefits from this unique program that takes coaching to the next level.
Posted by Laura Thompson at 11:55 AM No comments:

Hope these insights are helpful!

Laura
Posted by Laura Thompson at 11:45 AM No comments:

Creating the New Chapter in Your Life

First published on HuffPost as "The Issue Behind the Issue" by Laura Thompson, December 2, 2017

The “issue behind the issue” is breaking the habit of being yourself (Dr. Joe Dispenza), discovering your “who” (inner mastery) to create high impact in your external environment. It takes time and commitment to change our thoughts, emotions, and behaviors. It takes courage to surrender to the unknown and let go of the need to be in control of one’s environment. It takes practice and experiences to reorganize the neural pathways in our brains to be in alignment with the idealized self, i.e., proven by the science called neuroplasticity.

It's normal to think “in the box” because we’re attached to our conditions in life, neuro-chemically and psychologically. It’s time to be aware and witness these conditions and begin the process to think “outside of the box”. Allow yourself to be vulnerable, open, and dream of that greater you and step into it, step by step, like Gandhi, Churchill, and Mother Teresa have done. They had a vision and kept going regardless of the many roadblocks and curve balls thrown at them. Dreams can be achieved when your inner and external environment no longer hold you back.

Practice breaks the habit of being your old self and opens you up to positive change towards becoming the new you, unfolding that new chapter in your life. Although it’s helpful to understand your past and heal your stories, it’s time to rewire and transform your brain into a new map of your desired future. The future you that you want to become—to achieve inner mastery for high outer impact which is in essence the meaning of getting to the “issue behind the issue”.

One of my roadblocks was not wanting to be in the spotlight, center stage, the center of attention. The “issue behind the issue” links psychologically to a childhood story—better to be seen and not heard, keep quiet, remain behind the scenes. I’m sure many of us grew up in households whereby our parents meant well as they wanted us all to behave well. The “issue behind the issue” is like peeling off the layers of an onion. That was the first layer.

The second layer related to my Mother’s competitive nature with me while growing up. My teenage story concerned me not shining or expressing my voice because when I did, my Mother would withhold her love for me because she had to be the center of attention. After years of psychotherapy, self-help, and coaching, I have uncovered this story and have healed it. Most everyone thinks my Mother is a nice lady and she did the best with what she knew on how to raise children. I honor my Mother’s presence in this world.

Digging deeper, the third layer is fear of authentically expressing my voice because of being hurt by criticism and judgement by others but this can be rectified with my new story to not take things personally. At a Hay House Writer’s Workshop in Bristol, England, CEO Reid Tracy, mentioned that there will always be people who criticize you and they’re in the minority. Most people give good reviews. The message is to focus on the positive and discern what is considered constructive criticism and take it into account.

Personally and professionally, there may be more layers to uncover but I’m ready to enter the new chapter of my life with a stronger voice.

That was the threshold I crossed at Dr. David Drake’s three-day retreat “Crossing Your Next Threshold” in New York City that I co-organized as Team Leader as well as having facilitated one group session. Through experiential learning, my brain became rewired to accept being in the spotlight with authentic self-expression. As a coach, trainer, facilitator, leader, and writer, one has to be center stage for awhile until it’s time to co-lead or co-create with others. Hence, I shall continue practicing leading self, leading others, and leading communities with authenticity, humility, nonjudgment, loving kindness, mindfulness, and compassion learned from my chosen role models. After all, life is an interactive journey.

Now, I’m exploring my new map of my desired present and future, although most of it remains unknown. I’ve taken the leap with faith and trust.

What’s your “issue behind the issue”?

Posted by Laura Thompson at 1:04 PM No comments:

Transform your personal and professional relationships practicing mindful communications. Conversational intelligence is a means of making more meaningful connections with others. 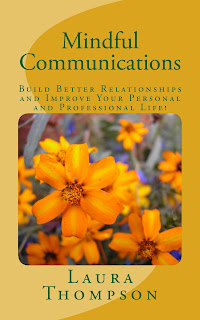 Click or copy and paste this URL into your browser: https://www.amazon.com/dp/B06WVC1PDJ

Let's create a harmonious world!
Posted by Laura Thompson at 2:39 PM No comments:

Email ThisBlogThis!Share to TwitterShare to FacebookShare to Pinterest
Labels: Books

Metropolitan Playhouse located in the East Village was pleased to present the IRIS STRING QUARTET in a concert of major works by Ravel and Shubert, along with the World Premiere of MICHAEL KOSCH'S Giotto (selections) for violin solo.  The program included: Maurice Ravel’s Sonata for Violin and Cello; Franz Schubert’s String Quartet No. 14 in D Minor, D.810 “Death and the Maiden”; and, Kosch's world premiere.

The Iris Quartet has played in most of New York's finest venues like Carnegie Hall, Alice Tully, Steinway, Merkin, and Avery Fisher Hall at Lincoln Center so it was a pleasant surprise to listen to them in a small chamber; especially, for the classical chamber music lover. Apparently, the quartet is named after the Greek goddess of the rainbow. These young musicians come from different countries (Albania, China, and Japan) and some were educated at Juilliard and others at respective renowned schools in their country of origin as well as having trained with the masters in their field.

The Iris Quartet was excited to lead off a fifth season of concerts in this award-winning theater that is an integral part of the East Village theater scene. Metropolitan Playhouse was also delighted to present the Iris String Quartet as part of the MUSIC AT METROPOLITAN series in its intimate downtown home, whose acoustics and size are ideally suited to chamber concerts and solo artists' recitals.

The concert began with a lovely surprise Bach violin solo by Muneyoshi Takahashi.

Maurice Ravel’s (1875-1937) Sonata followed and was a very interesting choice made by Yibin Li. It almost sounded as though it were composed for the 21st century and yet it was composed between 1920-24. It flirted with avant-garde approaches linked to Stravinsky and Schoenberg and its astringent harmonies sounded like what we regard as avant-garde jazz today. This was very different than the Classical Ravel that I’m accustomed to and which defined this Frenchman’s work.

Kosch's (b. 1959) world premiere was next which was inspired by Giotto di Bondone (1267-1337), a Florentine painter and architect who was considered one of the first great artists of the Italian Renaissance. Kosch is known to compose his works inspired by great artists with the idea that art inspires musical composition.

After a short intermission, the quartet finished with another interesting choice—Franz Shubert’s  (1797-1828) “Death and the Maiden”.  Ms. Li explained that this string quartet was composed while Shubert was dying so it felt like the notes were between life and death, but more like celebrating the last moments of his life. Shubert’s music influenced by the Romantic movement sounded poignant and rapturous.

After the intimate and romantic performance, there was a lovely reception whereby all the audience members could meet the musicians and the composer, Kosch, which led to interesting conversations.

Posted by Laura Thompson at 6:00 PM No comments:

HAMILTON’s Educational Program in partnership with The Rockefeller Foundation, NYC Department of Education and The Gilder Lehrman Institute of American History shall provide 20, 000 New York City student tickets to see the musical Hamilton.

On November 30, 2016, 1300 students from New York City (NYC) public schools gathered at the Richard Rodgers Theatre on Broadway for the inauguration of this unprecedented partnership funded through a $1.46 million grant provided by The Rockefeller Foundation. This innovative collaboration provides students the opportunity to see Hamilton on Broadway after studying American History, a curriculum designed by The Gilder Lehrman Institute.

The program started with opening remarks by the partners, followed by original student performances from 17 NYC public schools, a Q & A with some members of Hamilton, lunch, then a Matinee performance of HAMILTON! The enthusiasm of the students throughout the whole day was immense with deafening applause and whistles of excitement and happiness. It was a joyful day.

As HAMILTON creator Lin-Manuel Miranda said, “There is no feeling on earth like performing for a theater full of students who are learning about our founders in class and seeing how it still relates to their own lives on stage.” Miranda’s goal is to build this program across America.

Additionally, Judith Rodin, President of The Rockefeller Foundation summed it up quite nicely, “The partnership between HAMILTON and The Rockefeller Foundation is a game changer for 20,000 New York City public schools’ students. Today, the first 1,300 experienced something truly inspirational – the story of America's founding fathers as told by actors and actresses who look just like them, through a transcendent Broadway musical created by a student of the New York public school system —just like them. We couldn't throw away our shot at bringing Hamilton to the audience it could affect most, who otherwise might not have had the opportunity.” This was also the theme of the Q & A afterwards with some of the cast members of HAMILTON.

James G. Basker, President of The Gilder Lehrman Institute of American History said, "This project is transformative. Twenty thousand students will experience American history in a new way and find their own connections to the Founding Era, to the performing arts, and to the future of our country."

NYC Schools Chancellor Carmen Fariña said, "I thank the Miranda family for assuring that their passion for history and music is shared by New York City students. This musical will impact the lives of thousands of students and connect to enriching curriculum, undoubtedly sparking passion and an understanding of how inspiring history can be in the classroom, in our great City, and beyond."

I think the partners characterized their aspirations succinctly. It’s a marvelous idea to roll out this program throughout America. Bravo to all in creating this awe-inspiring partnership to educate students about the Founding Fathers!

Posted by Laura Thompson at 11:57 AM No comments:

Tickets: $10 (Cash Only) Reservations: tickets@actingstudio.com Information: 917-982-5083
Seating is limited: 30 Seats only. Tickets must be claimed no later than 30" before curtain. 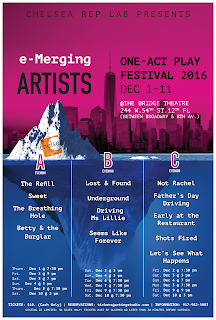 Laura Thompson's one-act short play "Lost & Found" is shown during Evening B performances. Laura is very exciting that her play and her friends' plays are being stage produced by wonderful directors and actors at this festival.

Posted by Laura Thompson at 12:04 PM No comments: