Ballet Hispanico at The Joyce Theater 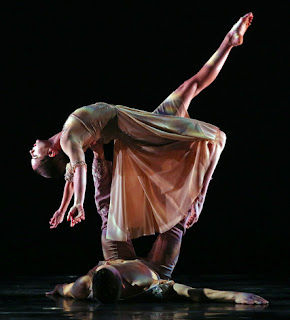 Artistic Director and CEO Eduardo Vilaro commented that the program this year reflected the "breadth and range of the company over the past 45 years of artistic reflection" and the works of the choreographers honor Ballet Hispanico's ballet legacy fused with eclectic contemporary dance that portrays America's diversity.

Ballet Hispanico, the nation's premier Latino dance organization, presented three programs. It began with Choreographer's Gustavo Ramirez Sansono's Flabbergast, a story about immigrants with preconceived notions concerning a new and foreign land and it was done with humor and fast-moving, stylistic modern dance set to the music of Juan Garcia Esquival.

The second program was Bury Me Standing choreographed by Ramon Oller with traditional gypsy melodies and flamenco music by Lole y Manuel. Oller created this piece based on the culture of the Gypsy or "Roma" people that reflected their strong communal bonds, sensuality, feelings of oppression and longing and strength. The sensual music was felt in the heart and soul of audience members who were moving their bodies rhythmically in their seats. It felt like a Latino counterpart to Alvin Ailey, the dance troupe that celebrates African-American ethnic traditions.

The third and last program was Club Havana choreographed by Pedro Ruiz set to Latino dance music like the Mambo, Cha Cha Cha, Bolero, Rhumba and Conga. It was a fusion of modern dance and ballet with Latin dances. It's a portrait of glamorous Havana of the 1950s during the heyday of Cuban music, dance, and nightlife. It ended with a Latin social dance under confetti which was magical.

Overall, the Ballet Hispanico dancers are wonderful to watch and they portray their characters so the stories are understood. The dancers can bend in every direction, leap, strut, and engage in inventive partnering moves. At the end of the entire program, one feels real joy.

I would highly recommend to go to Ballet Hispanico's other performances throughout the year whether in the United States or around the world.


http://www.loralia.com   @LORALIA
Posted by Laura Thompson at 1:47 PM No comments: